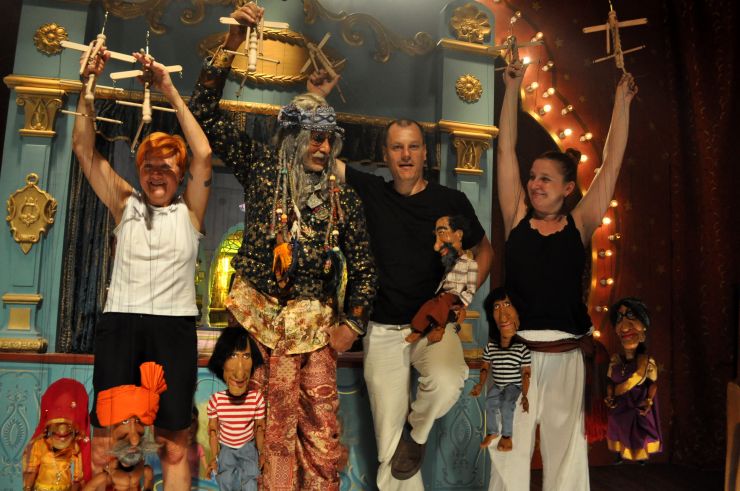 In the middle of summer Bollywood Rising Sun Production approached us to create almost two dozen custom made puppets for Indian Tata Sky TV.  We were waiting to get more details with enthusiam.

The main star refused to shave... and that’s how we got this project. The solution from Indian production was very creative and they called us. Czech Marionettes would stunt double for the real actors. The task was to create 12 original puppets and another 10 puppets adjusted according to their requiremets. After a preliminary agreement, we flew all the way to India to meet the client and work on details and our future cooperation. The face of this TV is famous Bollywood actor Sir Amithab Bachchan. Six of our puppets had the honour of playing his role.

We got all the manufacturing details in India – sketches, clothing requirements and the deadline. All the marionettes had to be ready in two weeks!

The production itself was a result of our specialist team work and pure human work as well. After our client’s approval, we designed and created the technical drawings containing many movement specifications for each character. Muscular bodies for the wrestlers, perfect proportions for female bodies, smooth hip movements for the dancers. After all this, we could start the 3D modelling and actual manufacture.

Each puppet started coming to life piece by piece and each body part had to go through the hands of people brushing the surfaces to make them ready for the final painting. We had about 300 components. Once we had all the parts finished, we had to put them together and build each character. All the puppets went through the hands of painters, hair makers and tailors. Luckily, the weather was really nice in Prague, and we could spend most of the time working outside.

The vital part of this project was the daily communication with our client to make sure everything was going to plan.

Two weeks passed and we got everything done. More than twenty people worked all day and sometimes even nights.  After completion, three puppeteers left for India and taking the finished marionettes with them.

We arrived in Mumbai three days before the actual shooting.  The first thing to do was string the puppets. This takes lots of accurate measuring according to the height of the construction for puppeteers. And than came the rehearsals, screenplay,  reading and first acting and the screen test.

The shooting was underway with Indian calmness and the whole team was very helpful the entire time. The atmosphere was very nice and smooth, which was quite pleasant. Also, the hospitality of the Indian production team was simply amazing.

The commercial was finished, adjusted and released to the world. Over one million views on Youtube in the first week! This was the best confirmation for CzechMarionettes, that our work has the best quality and popularity. We don’t have to be ashamed of our work in ten countries where marionettes have such a deep tradition we have respect.

From the bottom of our hearts, we’d like to thank Indian Rising Sun production. Especially Tushar, Suhas, Supria, Shoojit Sircar and to Sir Amitabh Bachchan because he refused to shave his beard. :-)

Are you planning a project like this? Contact us on gabriela@czechmarionettes.com and we can help you with production.